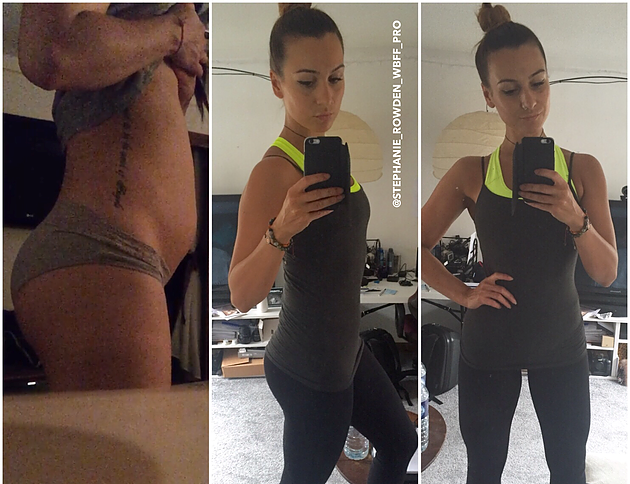 I am quite an all or nothing type of girl. I usually either go all out 100%, or I don’t at all, and this goes for food too.

I am extremely disciplined if I’m on competition prep or if I have to be strict for health reasons, but I am only human and there have been times when I have given into cravings and shushed my willpower. But what I found I would do is, if I was craving something and I couldn’t fit it into my macros, instead of staying on the healthy path and opting for berries, dates, or nuts to keep cravings at bay, my mind-set would change to, “well, if I’m going to mess up slightly and eat something I fancy, I may as well do it properly and go all the way”. Then I’d find myself at the bottom of a jar of Lotus caramel biscuit spread and the cycle began (which I discovered years ago when I lived in Belgium and can’t believe it made it over to the UK!).

It was a cycle of sticking to my training plan 100% and smashing the gym for a couple of weeks and then bingeing because I wasn’t progressing at all. I got obsessed with weighing myself and taking progress photos because I couldn’t understand what was going on, I hadn’t had any trouble getting lean before and it was as if everything I was doing, was doing the complete opposite. Something was definitely wrong with me, I knew it, but I just didn’t have a clue what it was.

I had acne, IBS, my hair was thinner, my nails were ridged and brittle, I had dark circles under my eyes, bad brain fog and clumsiness, my eyes were always red and I would use eye drops a few times a day, I was having terrible sleep, I had skin problems in my arms, chronic fatigue, I was severely bloated and had so much inflammation in my lower abdomen which was very painful and heavy, and no matter what I ate, I would blow up straight away. The worst symptom that I had was depression, and I didn’t know I had it at the time, nor did I realise how this was all connected. Everything was frustrating me, my temper was very short and my tolerance was low, I didn’t smile anymore, my sense of humour was non-existent, I cried a lot and I just felt like I couldn’t go on living like that anymore, I just felt trapped in my own head and didn’t know the way out. Not only was it a huge strain on my relationship and life, but my career as an athlete and personal trainer, I felt was on the line.

I spoke to a few people and called on the people of social media to ask for advice. A few different people kindly recommended tests and people to contact. What was really nice was the support but also talking to people who were also in the same position as me because it felt lonely. I had visited the doctors already and I was prescribed some pills for IBS, we also started looking down the endometriosis path but in the meantime I was trying so many supplements and different diets, and I ordered a lot of different tests online to check things like adrenals and specific gut issues. This happened over a number of months and hundreds of pounds later I was finally diagnosed with gut candida overgrowth, very low beneficial bacteria and overgrown bad bacteria, which is an awful thing to deal with and get rid of, but I was happy that I had finally found what was causing all of these problems and I could finally start the journey to fixing it.

So now everything made sense! Candida is yeast and fungal overgrowth in the gut, but it almost acts like a parasite or host in the body making you eat certain foods so that it can thrive and get stronger. This explained the unbelievably, uncontrollable junk food cravings and binges, all of the symptoms including a new craving for alcohol. The one thing that made me feel so relieved was that i knew the brain fog and depression was down to this, and it wasn’t just who I had turned into.

Unhealthy gut flora can impact your mental health, leading to those symptoms like anxiety, depression and even autism in some cases.

Around 90-95% of serotonin is made in the gut! Serotonin is a neurotransmitter that is responsible for regulating mood and affects social behaviour, appetite, digestion, sleep, memory and sexual desire and function. So this is why it’s so important to fix gut problems.

What’s interesting is that we have 2 nervous systems:-

Both are connected via the vagus nerve which is the primary route your gut bacteria used to transmit information to your brain!
With candida (yeast), it affects brain and mood by producing chemicals that are directly toxic to the brain.

I have started my candida gut protocol journey, now 6 weeks in which feels like 6 months, and it does still try to control me and sends messages to my brain telling me that I need to eat junk food and I still get the low moods. But I’m getting so much stronger now and I am able to control it. I also started visiting Spirohealth in Putney for twice weekly spinal adjustments as the two are also connected and my spine is slightly pushing on my digestive system.

But I’ve been seeing some good signs, my nails have started growing really long, my eyes are brighter, my skin improved so much that I don’t wear any make up on my face now, my skin problems on my arms disappeared, the bloating and IBS which was really affecting me physically and mentally has gone down dramatically, but the most important thing for me is that I feel like me again! I do have days where I feel low but for the most part I’m silly again, happy and much more laid back. And guess what? The day before I started my gut protocol, I ordered a pizza, a Chinese takeaway, bought ice cream, sweets and a bottle of prosecco and had it all. The very next day I cut out carbs and everything that was feeding the candida and started the process of killing it off and fixing my gut. I was quite worried because I have not been able to control the extremely strong cravings but 6 weeks on and I haven’t had not even 1 lick of anything that candida would thrive off. It is a very tough protocol to follow (especially when it’s summer and everyone’s invited you to their BBQ or events where there is food and alcohol!) and I find it much harder than competition prep, but I have no choice but to do it for my health and I don’t want to mess up even slightly and take a step back.

If I can go from depressed, binge eater to happy, super clean eating overnight, trust me, anyone can find the strength to do it for their own health. I have a long way to go but I’m much happier. I’ve stopped weighing myself, stopped tracking food and obsessing over calories, I’ve even cut out cardio, still lifting heavy but I’ve taken up yoga to help relax my mind and body.

I wrote this not for sympathy, but because I think when someone mentions they have a gut issue, people don’t usually understand the full extent of how much it affects a person and thinks it’s just being bloated. It has a huge knock on effect on the whole body and it can make you feel very isolated and like you just want to completely give up so I just wanted to offer support to people who are going through the same.

If anyone is experiencing any of the same symptoms, I would recommend finding out what the cause is before trying anything. I wasted so much money trying lots of supplements and diets to fix it but it was all wrong as I didn’t know what I was trying to fix. Unfortunately I’m not qualified to help with a protocol but I can help start your journey if you need any advice, or just offer support so feel free to email me.

Thank you to everyone who’s helped me on my journey. Feel free to contact Spirohealth for information on spinal health and use discount code TEAMFITT for a half price initial consultation to get a complete check up at the clinic or a FREE 15 minute meet up with Natalie to talk things over and answer any questions which can be done using Skype also. www.spirohealth.co.uk
Info@spirohealth.co.uk

We aim to get back to all bookings within 48 hours, if your appointment is urgent please call: 020 8780 5656 or email us directly: info@spirohealth.co.uk

If you are unsure if we can help you, you can take advantage of our complimentary, no obligation, Discovery Session. This is a face-to-face appointment with one of our Practioners to chat about any health concerns you might have, and learn about how we can help you